St. John the Apostle, also called Saint John the Evangelist or Saint John the Divine, (flourished 1st century ce; Western feast day December 27; Eastern feast days May 8 and September 26), in Christian tradition, an apostle of Jesus and the author of three letters, the Fourth Gospel, and possibly the Revelation to John in the New Testament. He played a leading role in the early church at Jerusalem.

John was the son of Zebedee, a Galilean fisherman, and Salome. John and his brother St. James were among the first disciplescalled by Jesus. In The Gospel According to Mark he is always mentioned after James and was no doubt the younger brother. His mother was among those women who ministered to the circle of disciples. James and John were called Boanerges, or “sons of thunder,” by Jesus, perhaps because of some character trait such as the zeal exemplified in Mark 9:38 and Luke 9:54, when John and James wanted to call down fire from heaven to punish the Samaritan towns that did not accept Jesus. John and his brother, together with St. Peter, formed an inner nucleus of intimate disciples.

In the Fourth Gospel, ascribed by early tradition to John and known formally as The Gospel According to John, the sons of Zebedee are mentioned only once, as being at the shores of the Sea of Tiberias when the risen Lord appeared. Whether the “disciple whom Jesus loved” (who is never named) mentioned in this Gospel is to be identified with John (also not named) is not clear from the text.

John’s authoritative position in the church after the Resurrection is shown by his visit with St. Peter to Samaria to lay hands on the new converts there. It is to Peter, James (not the brother of John but “the brother of Jesus”), and John that St. Paul successfully submitted his conversion and mission for recognition. What position John held in the controversy concerning the admission of the Gentiles to the church is not known; the evidence is insufficient for a theory that the Johannine school was anti-Pauline—i.e., opposed to granting Gentiles membership in the church.

John’s subsequent history is obscure and passes into the uncertain mists of legend. At the end of the 2nd century, Polycrates, bishop of Ephesus, claims that John’s tomb is at Ephesus, identifies him with the beloved disciple, and adds that he “was a priest, wearing the sacerdotal plate, both martyr and teacher.” That John died in Ephesus is also stated by St. Irenaeus, bishop of Lyon c. 180 ce, who says John wrote his Gospel and letters at Ephesus and Revelation at Pátmos. During the 3rd century two rival sites at Ephesus claimed the honour of being the apostle’s grave. One eventually achieved official recognition, becoming a shrine in the 4th century. In the 6th century the healing power of dust from John’s tomb was famous (it is mentioned by the Frankish historian St. Gregory of Tours). At this time also, the church of Ephesus claimed to possess the autograph of the Fourth Gospel.

Legend was also active in the West, being especially stimulated by the passage in Mark 10:39, with its hints of John’s martyrdom. Tertullian, the 2nd-century North African theologian, reports that John was plunged into boiling oil from which he miraculously escaped unscathed. During the 7th century this scene was portrayed in the Lateran basilica and located in Rome by the Latin Gate, and the miracle is still celebrated in some traditions. In the original form of the apocryphal Acts of John (second half of the 2nd century) the apostle dies, but in later traditions he is assumed to have ascended to heaven like Enoch and Elijah. The work was condemned as a gnostic heresy in 787 ce. Another popular tradition, known to St. Augustine, declared that the earth over John’s grave heaved as if the apostle were still breathing.

The legends that contributed most to medieval iconography are mainly derived from the apocryphalActs of John. These Acts are also the source of the notion that John became a disciple as a very young man. Iconographically, the young, beardless type is early (as in a 4th-century sarcophagus from Rome), and this type came to be preferred (though not exclusively) in the medieval West. In the Byzantine world the evangelist is portrayed as old, with long white beard and hair, usually carrying his Gospel. His symbol as an evangelist is an eagle. Because of the inspired visions of the book of Revelation, the Byzantine churches entitled him “the Theologian”; the title appears in Byzantine manuscripts of Revelation but not in manuscripts of the Gospel. 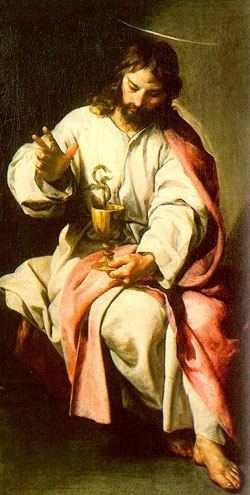 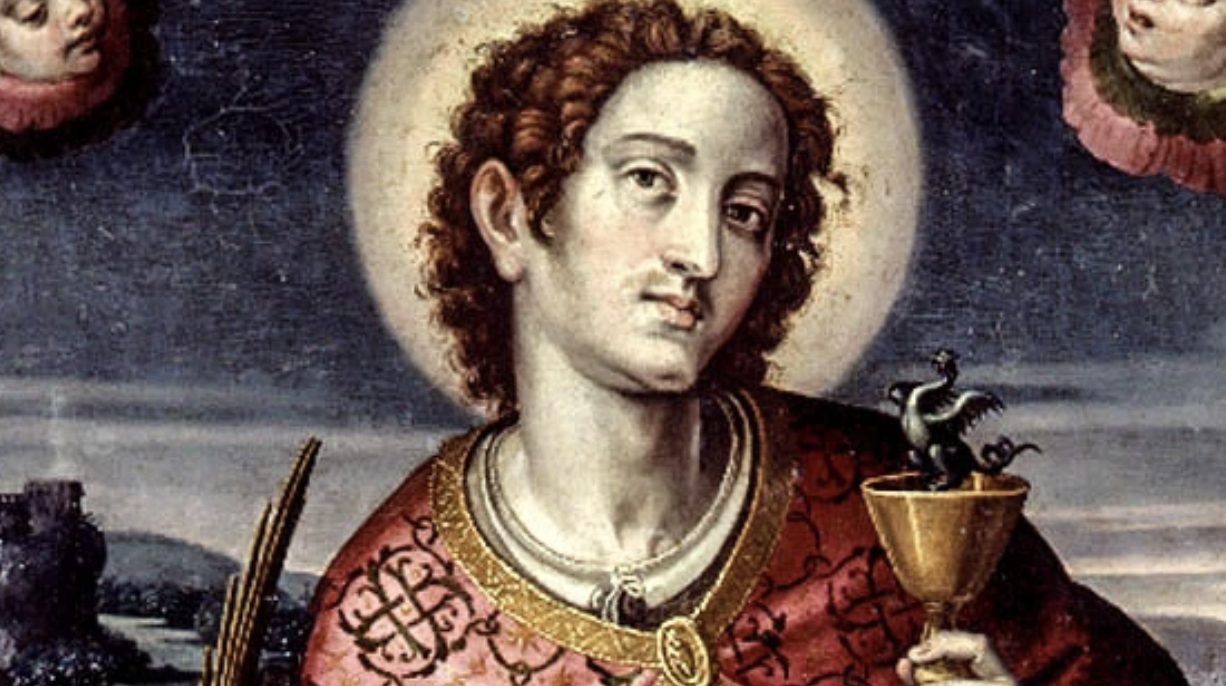 An image that presents the Evangelist holding a chalice from which a snake emerges condenses a little-known story of the saint.

What does St. John the Evangelist have to do with wine and snakes?

Generally, John the Evangelist is seen accompanied by an eagle. The eagle, as is well known, is an animal with wide field of vision, which allows it to see for long distances. Thus, he has been associated with the vision of the Apocalypse (literally, “Revelation”) that the saint had on the Greek island of Patmos where, according to St. Irenaeus of Lyon, the evangelist wrote the Book of Revelation.

He is also represented, more commonly, seated while writing, or surrounded by some of his disciples (the so-called “Iohannine School”), dictating some of his letters, or perhaps the Gospel.

But there is a less common iconographic model, in which the saint appears holding a chalice with his right hand, from which a green snake emerges, while bringing his left hand to his chest.

The image is related to a certain memorial of the day of St. John the Evangelist, which is celebrated on December 27. Until well into the 20th century, it was a tradition to bring bottles of wine or cider that day to Mass, which would then be blessed.

Thus, every time a bottle of wine or cider was opened in the house, a little of that wine blessed at the feast of St. John the Evangelist was to be poured into the new bottle.

In some regions, this wine (which is nicknamed “Saint John’s Love”) is given to the bride and groom when they get married, or it is administered to those who are going to die, as a sacramental.

The tradition comes from a story associated with the biography of the saint: it is said that, while in Ephesus, John was offered a glass of poisoned wine. Before drinking, he blessed the drink and the poison came out of the cup in the form of a small green snake.

Why the Chalice and the Snake?

On December 27, the Feast of Saint John, wine is often blessed in religious houses and drunk at the meal. The old Roman Ritual contained a blessing of wine for this feast. This commemorates the legend that once, while at Ephesus, John was given a cup of poisoned wine to drink. Before drinking, he blessed the cup and the poison departed the cup in the form of a serpent.  According to Francis X. Weiser in the Handbook of Christian Feasts and Customs (Harcourt Brace), as late as 1952 Catholics in Central Europe brought wine and cider to church for blessing on the feast of St. John. They then took it home and some of them poured a bit of the blessed wine or cider into every barrel in the cellar.

The blessed wine is called by some the “love of Saint John.” In some places the bride and groom at a wedding are given a sip to drink. In other cases, a sip of the wine is given to a dying person as a sacramental.